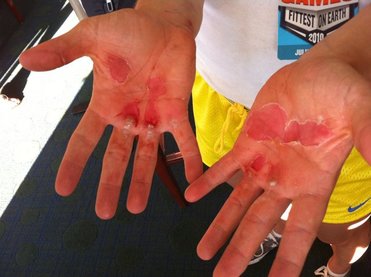 Hand tears…. sacral chaffing…. did anyone warn you about these side effects of Crossfit??!! In our pursuit to meet ‘Fran’ head on or show ‘Angie’ that 100 sit ups after 100 pull ups is a done deal, some of us have been left with wounds! And wounds that hurt! I have experienced both and wanted to share some tips that I have found helpful.

Firstly the hands. Hand tears don’t distinguish between men or women, a steady number of people at the box have experienced this pain. It tends to happen more to those who have built up calluses on their palms, but I have seen some new folk suffer too. Using too much chalk does not seem to help; as you sweat the chalk turns more paste like and the friction from the bar then breaks the skin easily. So try restraining yourself from reaching into the chalk bucket too much.

Callus care is my best tip, a good bit of TLC goes a long way to preventing the tear happening, hence relieving the pain. Keep them filed down so that they are as low as possible. Some folk sand them, use a pumice stone and even shave them. I tend to cut mine back and file them. Whichever is your preference, do it! However, if your hands are soft, or thin skinned, you might need to build up your calluses.

Alongside keeping calluses as low as possible, a number of us are using gymnastic grip guards. These are a piece of leather that covers the main vulnerable areas. These can be purchased from our Box Shop Store.  Be warned though, if you’re training for competition, you probably won’t be able to use them during that, so there is an argument for getting used to doing WODs without them.

I also tried tape, which uses the same principle. Check out this link: Taping methods(Crossfit Los Angeles). I’ve tried this with climbing tape, but found that the tape rolled up during the work out. However I’ve seen a number of CrossFitters use this method effectively using Rock Tape. I’ve also read about some athletes using super glue, but I’d not recommend that one! Another method you could try is using an alternative grip for pull ups, holding with the bar further up your fingers, ask one of the coaches about this.

Sacral chaffing (or even bum sores!) are pretty painful too and take a few days to heal (said from experience). Sit ups are the culprit, basically friction between clothing and the mats. Unbeknown to many of you there has been some scientific research going on with different underwear amongst the ladies!! Part of this research has been to see if different pants prevent these sores developing! The results revealed not! I’ve also tried lying on a different surface as I read on the web about the type of mat you lie on affecting it. But again, sadly, no joy. The best thing I have found (after trying Vaseline – with mixed results) is some ‘anti chaffing’ ointment – Bodyglide (http://www.bodyglide.com/) is what I buy (its what runners use to stop nipple bleeding!) You can buy it in any good running shop, but you must put it on before you start sweating (i.e. before the warm up), so come prepared. I tend to use a towel folded up as well.

These are not 100% guaranteed methods but I have found them to help 9/10 times, which is great.

So a bit of preparation, some hand TLC and hand grips go a long way to making my CrossFitting more enjoyable.